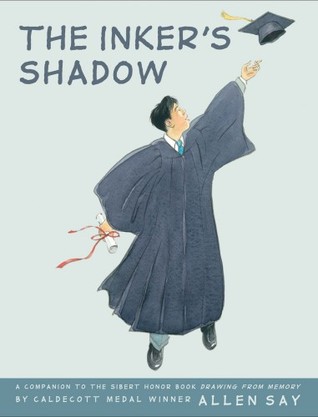 Allen Say doesn’t make many public appearances in Portland, but I still feel all warm and fuzzy that he lives in the same city I do. I just finished The Inker’s Shadow, sequel to Drawing from Memory. I hope someday there will be a third book, about his life as a young artist in San Francisco.

Partway through this book, a school principal in a small town gets teenaged Allen into an appropriate school (he had been at a dubious military academy with much younger kids) and uses his network to connect Allen with a job to cover living expenses. One person with privilege can make such a huge difference when they help someone with less.

When I poked around online I found this charming profile written by Say’s daughter when she was thirteen.

What I admire most about my father is that he always says exactly what he thinks.  When I was seven years old, I dragged my father into a Hello Kitty store.  After I had picked out the things I wanted, we walked up to the cash register.  The lady at the register rang up the purchases, and just as she was about to put them in a bag, my father said, “I really wish this place would burn to the ground.”  The lady gave him a blank look.  I was very embarrassed.  But that’s the way my father is.

It looks like some of what’s in the essay is in The Favorite Daughter, which is now waiting for me at the library. This segment of Oregon Art Beat shows the barely-furnished studio his daughter mentions. I was surprised to hear he completes the art before writing the text of his books.

Some of his books have mostly adult characters (and not zany kidlit types like Mr. Popper and Mrs. Whatsit, either), and I wonder if they have much of a child audience or are mostly read by adults. 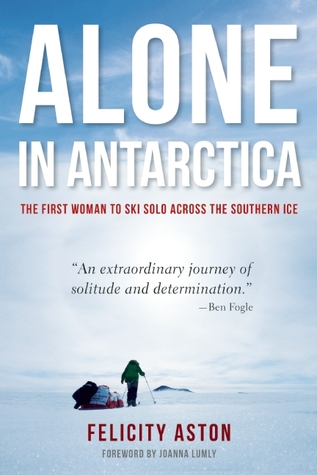 All my favorite moments in this book were ones when Felicity Aston had a hard time that either Sanguinity or I, in our milder lives of hiking and camping and (in Sanguinity’s case) climbing, had also experienced in a correspondingly milder form. Narcissistic, I know, but I felt it when it turned out that the porridge she’d packed for every single breakfast didn’t agree with her and she had to iron-will it down morning after morning. Or when after many days of all-day straight-line travel, she’s almost to the polar station where friends and supplies await, but there’s a tangly little network of trails around it and she can’t tell for hours if she’s going the right way. In fact, there’s a lot of Almost-There Syndrome, and also the difficulty of getting out of the tent and on the trail in the morning. (When my dad read my PCT trail journal, he asked, “Now, why was it you were having so much trouble in the mornings, packing up camp?” “I don’t know!” I semi-wailed, and I still don’t, exactly.) The mental argument, and the screaming tediousness of knowing the night before that you’ll be having the mental argument as soon as you wake up, but not being able to stop it.

So those were my favorite parts, but I think Aston does a good job of balancing the scenery, technical, and emotional aspects in the book so it doesn’t bog down in any of them. Helen Thayer’s books are good readalikes. I wonder if they know each other.

Felicity Aston says something a lot of ultrarunners say, that she does what she does in order to find her limits. I don’t fully understand that– when I do things that are extreme for me, it’s because I don’t want to find my limits– I am hoping to find out that something that I or other people aren’t sure I can do is within my limits after all. But maybe Aston is more driven than I am– she says that even as the plane approached to pick her up, she was feeling out mentally how much further she could have gone, whether she could have turned around and skied back to the pole. Maybe it’s more of a relief to her, to find things she can do but has no interest in doing again ever, thanks.

It’s been several weeks since the Spring Triumvirate hit town:

We’re well into daffodils now, and yesterday I saw irises in bloom, sheltered against a wall.

Spring has long been my least favorite season, one of always being too cold as I stubbornly try going without a jacket or turning the heat off, and wishing it would be summer already, and feeling like it’s time for fresh food but what’s available is radishes and lettuce. But I am going to give up this attitude. Portland has FIVE MONTHS of spring, from February to the Fourth of July. This is a spring town, and I am going to appreciate it.

Yesterday was the beginning of a clear stretch in the weather, and we were able to get some protective stain onto the new porch deck. In the same way that adventures are 95% packing, apparently painting and staining are 95% masking and draping the parts you don’t want to do. I think it’s gonna look good though!