Yesterday morning I went for the first run in a long time. I realized when I pulled my water bottle off the shelf that it had been a long time since I’d held it in my hand or filled it with water! (Then I realized that weird black stuff had spotted the inside, and I found another bottle.) I did four miles omg. Could be I’m back to running and still on my way to 100 miles. Not this season, but maybe next year. If things go great this season, maybe I’ll try for 50 miles at Autumn Leaves. Hard to know.

It’s so easy to drift away from things. In high school I was a musician, getting first chair in statewide orchestras and working up short piano recitals. There didn’t seem to be any difference between me and the kids who went on to be music majors and professionals. But once I went to college I didn’t audition for anything, didn’t play anything on the piano that I didn’t already know, and pretty much left performance behind. I don’t really know why.

And so with running. After recovering from the PCT 50-miler, I never got back in the groove. Then the winter weather made it very easy not to run. I missed it sometimes, I guess, but not enough to pull on the tights. I could always walk instead, in my regular clothes and carrying stuff if I wanted. I still don’t know that it’s not just a fair-weather blip that’s got me running again. Have I tipped over the line of doing what it takes– for example, running on workdays when time is tight?

I was grateful to read Evan’s post today about the “I just HAVE to write!” crowd. Because that’s not me either. Weird but true: the thing I am most disciplined about is going to work at my job to make money. If I’m low on energy, running and writing and most other things (not reading though, hmm) fall to the wayside, but I almost always still catch that bus downtown to the office. I often wonder what it would be like for writing to be that bottom-line for me.

Makes me glad for those one-time fun things that I don’t have to worry about or get attached to– like goalball, and tree-climbing! Last Wednesday, Elizabeth and I finally cashed in her Christmas present, a one-day tree-climbing class out at a farm in Oregon City. I didn’t know if there would be other students, because since I’d signed up the website had changed and it seemed to be just the lead guy doing stuff on his own now, but there were six of us students. Plus a French intern who had only been immersed in English for a couple of weeks and asked charming things like “comfy, that okay to say in a class? You should be comfy?”

We got to climb almost first thing, supervised and using ropes they’d placed before we got there. Then with that out of our systems, we learned knots so we could run things ourselves. Oh, knots. I’d seen many of them before, but knots and card games don’t stick in my head for long. There was lots of cheerful “good! Untie it and tie it again!” from the instructor.

We picknicked out of the breeze, and strolled around. It was cool and overcast, and the ground was muddy. One student’s car had gotten stuck on the way to the grove. We were sharing the field with cows, but they stayed picturesquely in the distance. The trees were oaks, a hundred years old or a little more–not common to find a whole grove of them intact so close to Portland.

After lunch we learned how to throw a thin line over a high limb, with a little weighted bag, and how to replace it with the real rope. Then we got to climb one more time, on ropes we’d placed ourselves. Here are E and me (I’m in purple, with my helmet ridiculously askew, I know!) 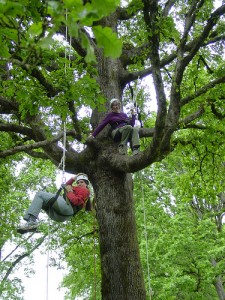 Three of our classmates were coming back the next few days to learn how to move around in a tree and from tree to tree; they’d be sleeping in hammocks aloft at least once. I know I’d love that “spiderwebbing” part, because it’s really fun to stand and move freely on the limbs knowing your harness will catch you if you fall! But I was fine with calling it a day and driving home for pizza. Hello, sore muscles!

One thought on “Drifting away, and climbing trees”