This week I started two new projects with Sanguinity!

We both joined the LiveJournal community Sherlock Holmes: 60 for 60. Each week I’ll be reading one of the original 60 Arthur Conan Doyle stories (or a fraction of a novel– the whole cycle will take 71 weeks total) and posting a related ficlet of exactly 60 words. We started with A Study in Scarlet, so my first contribution was of course about the “bull pup” Watson claims to keep but never mentions again.

I was sorry to leave the hotel: Sophie was my biscuit friend, and waited for me to finish the crumbs before sweeping. At the new house the tall man has a noisy howling-box but I must be quiet. The old dog won’t play, but I go out early with the tall man to sniff. Then run home for another breakfast!

New members are welcome to join in anytime, in case this appeals to you. This is round five, so chances are you’ll have another chance at any stories you missed.

I also bought the latest edition of my favorite hiking book, William Sullivan’s 100 Hikes in NW Oregon and SW Washington, so that Sanguinity and I can do them all and mark them off. There are so many that are wonderful but I had a “we did that” mindset, which is ridiculous. So today we checked off #8, Oaks Bottom. It wasn’t much more fuss than our usual neighborhood walks, and we heard red-winged blackbirds and saw woodpeckers working. There are multiple options for many hikes plus a bunch more at the back, so some recordkeeping details are unclear… for now I’m just writing dates and notes in the book. No set time frame.

a walk in the woods 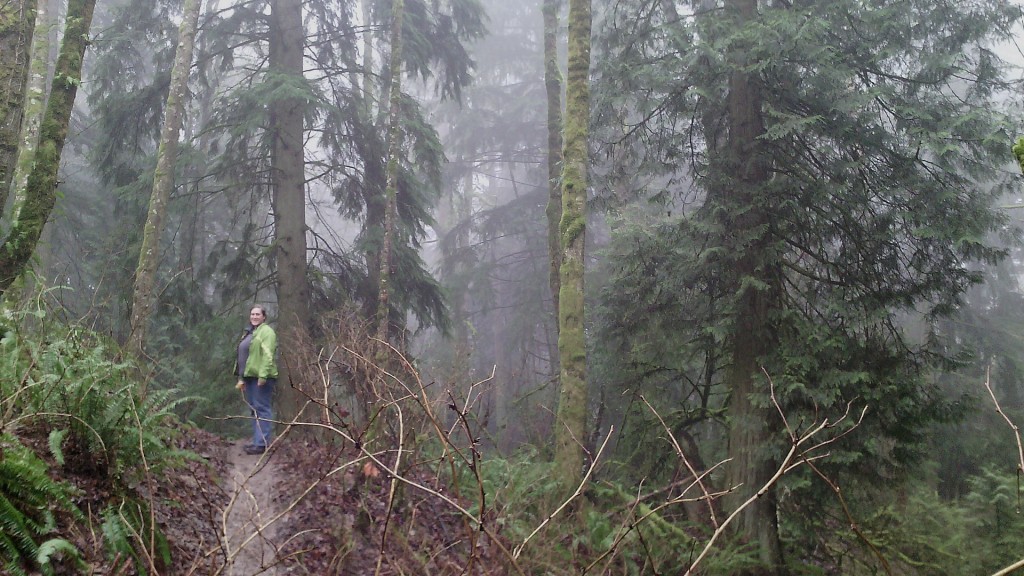 Simone, who is hardly ever interested in human food, took a peep by the neck and shook it to death, then shredded its head. She is still enjoying playing with the body, except when it gets stuck on her claw.

It’s a sunny weekend in Portland! Sanguinity and I did our hiking yesterday in the Gorge, a walk at Gillette Lake on the Washington side. It was uncrowded, probably because it features power lines and clearcuts rather than stunning waterfalls. But plenty of beauty and interest including garter snakes sunning on the hillside, a lizard, perfect trilliums in the woods, and retrievers launching themselves into the water after sticks. Sang read me three chapters of Kidnapped while we lounged on the moss.

All the Livelong Day

At work I’ve gone from 3/4 time to full time for the next couple of months, to help fill in for someone on medical leave. Last week was my first 40-hour work week in ages. Let the whining commence!

Nah…I miss my schoolkid schedule, but it’s temporary. I’m cutting back on nearly everything else– no going to Chinuk wawa three times a week for awhile, and I don’t know how many walks with refgoddess I can fit in when I have to be at the office by 8:30. Running remains on the back burner. I think I’ll do best when I make things very simple: work, writing, and basic maintenance of health and household. Monastic contentment, right? And I can use the money, with a Colorado trip coming up and some furnace-and-roof debt still on the books.

But I do feel a rumble of resentment and panic when my time starts to resemble a sliding-tile puzzle, where I’m moving blocks around but constantly running into the walls of work and sleep. When I consider getting up a half-hour earlier to do something, and it won’t work because it will disrupt things back into the previous evening. Life shouldn’t be like that.

At least I’ve been better than usual this week about taking advantage of short writing opportunities. Ten minutes suddenly seems worthwhile, I’m writing on the bus a little because I might not get another chance all day, and an hour feels like luxury instead of obligation. I hope I’ll have a little to show for it after eight weeks, as I very very slowly conjure up this novel.

Today Sang and I got out to Powell Butte for a little hike– in fact we were all done and back at the house, with a grocery trip thrown in, by eleven o’clock! The wind was cold, so we hastened to the forested far side of the hill. Lots of yellow violets blooming, and the nettles are knee-high and looking pretty darn vigorous already. I was happy to hear a raven, after a winter of staying in town hearing crows.

Yesterday I got around to making soda bread, after buying the buttermilk just before St. Patrick’s Day. Warm with butter: so good.

Next book to read: Lisa Lutz’ Trail of the Spellmans, fifth in a series that makes me laugh out loud. (I’m currently finishing up Kage Baker’s The Children of the Company: satisfying to fill in some knowledge-gaps, but Mendoza is the heart of the series for me and she doesn’t appear in this one.) As for TV, Sang and I are re-watching the first season of Sarah Connor Chronicles, which feels much richer and more suspenseful than the first time around. (So many shows I’m iffy about the first season. Will they all seem better on re-watch?)

The self-assigned chore for Sanguinity and me yesterday was to go pick up the dog’s ashes from the pet funeral center in the suburb across the river. And to get out of the house and go for a walk, because Thursday was all cooking and cleaning and eating and talking, and neither of us stepped any farther outside than the compost pile.

There are bike paths and parks very close to our destination, down by the Tualatin River, so I tossed a water bottle and some cold turkey in the car and we set out. The pet funeral place is in a business park, in one of those not-quite-industrial strips on a busy street. Wooden pallets and gravel parking lots and puddles. But you step in the door and suddenly classical music is playing and there are little urns and memorial stones on shelves lining all the walls, and prayer flags with pawprints, and books about grieving for pets.

While the lady was going to get Louie’s ashes I snooped around some more. In the next room there were urns for horse ashes, which didn’t seem big enough to hold a whole horse’s worth, and a dog-proportioned wooden coffin with a satin lining and pillow, and an urn showing the Twin Towers and Statue of Liberty (?). The little waiting room had a Buddha statue in it. Between that and the prayer flags, Buddhism definitely trumped Christianity in pet funeral representation. I wonder why that is.

We were quizzed on Louie’s other last name, which made me wonder if pet-custody-ashes-stealing is common, but turns out there was another set for a Louis with a last name similar to mine, so she was just making double-sure to hand us the right box. (Tin box like cookies come in, but small, with flowers on it.) We’d been curious about whether his surgery hardware would still be in there, so I asked, and she said no, that stuff is taken out before final processing (grinding everything up so there aren’t big chunks of bone). But, she offered to go get the pins and staples for me if I wanted! She clearly didn’t want to, but she was game. I assured her it was okay, I would have no regrets about leaving them behind. I had thought the funeral people might be overly solicitous or smarmy, but she was a touch snarky and hilarious.

We made our way to Tualatin Community Park. They have a really good playground, suitable for bigger kids (and us), with a tall rope web structure and interesting pivot-and-twirl metal things. We walked along the bike path by the river, stopping to watch the dogs at the dog park, and continued over the pedestrian bridge to Cook Park, which is in Tigard. There was a small garter snake, a kingfisher, oak galls, rose hips, geese…reminded me of the bike trails in my Colorado hometown.

We wanted to cut over to a nearby trail to make a loop back through Durham City Park toward the car, but there were railroad tracks and blackberries in the way. We decided to walk around on the streets and find the trail from the other side. Bad idea. The streets were busy and we trudged along with cars whipping past until we were hungry and dispirited and possibly lost. A pedestrian we met was a visitor herself, but told us she’d come from the city park via a certain street. We were ecstatic when we got to that street, but it turned out to be a wandering fancy-houses development which led us in a big curve back to the busy street. (If we’d gone down the right cul-de-sac, we probably would have found trail access. But by then we were in forced-march mode and the thought of traipsing down each one to look was not appealing.)

We finally saw a Taco Del Mar. Fish tacos and Fanta gave us hope that maybe we could find the car again before full dark. Sure enough, we crossed the street to a parking lot with a map and saw that we were only a block from the park! Total hiker moment of being so glad to see the car and drive home to where the food and books are. Which felt a little silly, but hey, we had walked through three different cities.

Now Louie’s ashes are up on a shelf next to the cat’s. We don’t have plans for them, other than realizing we should do something with them before we die too. Maybe there will be a summertime hike when it seems right to take them along and scatter them somewhere Louie would have liked. (Which means somewhere smelly and interesting, not one of those boring viewpoints we keep insisting on stopping at.)