After work I went through my current spiral notebook. It’s time to start working on my next long project book again after a long break over the holidays, and I wanted to see what notes I’d made. (KFC is Monday, and I really want to have something. Anything. I no longer worry about wasting their time.)

There were a lot of one-page blocks I wrote in the early mornings, mostly recounting dreams. I have no memory of a lot of them, even when I read them in my own handwriting. But it’s still neat to know that my brain came up with Colin Powell trying to build a filing cabinet around me in the garage.

And this notebook had reminders that Louie’s last few months were hard, especially before we knew his death was imminent. The first page, August 29th, starts with

The dog doesn’t get off his bed now. He doesn’t come sleep on the bedroom floor to be with us. He’s here when I come out to the living room. Yesterday I got a wagging tail; today just a measuring look.

In his last few days, it was easy to be resigned and indulgent with taking him out all the time, and cleaning up after him. I forget that when the end was not quite in sight, it was much more adversarial:

Jo Ann Beard wrote a beautiful essay with her old collie in it, and that is nothing like this, because I am sleep deprived, deprived of time without toenails clicking and dragging on the linoleum, time without panting amen.

And the next day:

The dog is whining from across the room. From seven to eight I ignore him. That is how we can live in peace. I don’t even know.

The notebooks will never be a representative sample of my emotional life, because I write more in some emotional ranges than others. They are a place to lie, too, and to alternate between bitter kvetching and making fantasy lists and schedules. But sometimes they remind me of some things. I save a few lines and then shove them in an overcrowded box in the basement, or recycle them. I no longer think anyone will want to pore over them in an academic library after I die. They do pile up.

The self-assigned chore for Sanguinity and me yesterday was to go pick up the dog’s ashes from the pet funeral center in the suburb across the river. And to get out of the house and go for a walk, because Thursday was all cooking and cleaning and eating and talking, and neither of us stepped any farther outside than the compost pile.

There are bike paths and parks very close to our destination, down by the Tualatin River, so I tossed a water bottle and some cold turkey in the car and we set out. The pet funeral place is in a business park, in one of those not-quite-industrial strips on a busy street. Wooden pallets and gravel parking lots and puddles. But you step in the door and suddenly classical music is playing and there are little urns and memorial stones on shelves lining all the walls, and prayer flags with pawprints, and books about grieving for pets.

While the lady was going to get Louie’s ashes I snooped around some more. In the next room there were urns for horse ashes, which didn’t seem big enough to hold a whole horse’s worth, and a dog-proportioned wooden coffin with a satin lining and pillow, and an urn showing the Twin Towers and Statue of Liberty (?). The little waiting room had a Buddha statue in it. Between that and the prayer flags, Buddhism definitely trumped Christianity in pet funeral representation. I wonder why that is.

We were quizzed on Louie’s other last name, which made me wonder if pet-custody-ashes-stealing is common, but turns out there was another set for a Louis with a last name similar to mine, so she was just making double-sure to hand us the right box. (Tin box like cookies come in, but small, with flowers on it.) We’d been curious about whether his surgery hardware would still be in there, so I asked, and she said no, that stuff is taken out before final processing (grinding everything up so there aren’t big chunks of bone). But, she offered to go get the pins and staples for me if I wanted! She clearly didn’t want to, but she was game. I assured her it was okay, I would have no regrets about leaving them behind. I had thought the funeral people might be overly solicitous or smarmy, but she was a touch snarky and hilarious.

We made our way to Tualatin Community Park. They have a really good playground, suitable for bigger kids (and us), with a tall rope web structure and interesting pivot-and-twirl metal things. We walked along the bike path by the river, stopping to watch the dogs at the dog park, and continued over the pedestrian bridge to Cook Park, which is in Tigard. There was a small garter snake, a kingfisher, oak galls, rose hips, geese…reminded me of the bike trails in my Colorado hometown.

We wanted to cut over to a nearby trail to make a loop back through Durham City Park toward the car, but there were railroad tracks and blackberries in the way. We decided to walk around on the streets and find the trail from the other side. Bad idea. The streets were busy and we trudged along with cars whipping past until we were hungry and dispirited and possibly lost. A pedestrian we met was a visitor herself, but told us she’d come from the city park via a certain street. We were ecstatic when we got to that street, but it turned out to be a wandering fancy-houses development which led us in a big curve back to the busy street. (If we’d gone down the right cul-de-sac, we probably would have found trail access. But by then we were in forced-march mode and the thought of traipsing down each one to look was not appealing.)

We finally saw a Taco Del Mar. Fish tacos and Fanta gave us hope that maybe we could find the car again before full dark. Sure enough, we crossed the street to a parking lot with a map and saw that we were only a block from the park! Total hiker moment of being so glad to see the car and drive home to where the food and books are. Which felt a little silly, but hey, we had walked through three different cities.

Now Louie’s ashes are up on a shelf next to the cat’s. We don’t have plans for them, other than realizing we should do something with them before we die too. Maybe there will be a summertime hike when it seems right to take them along and scatter them somewhere Louie would have liked. (Which means somewhere smelly and interesting, not one of those boring viewpoints we keep insisting on stopping at.)

Sanguinity and I have set Louie’s final vet appointment for tomorrow, here at home. He rallied for a few good days, but it’s time now.

He’s still willing to be tempted by food (not his food, but our food), intermittently. I’ll see if I can make some good dishwashing work for him tonight; he takes his duties seriously. We were hoping he’d make it to Thanksgiving– here he is in his element, i.e. a turkey bag, last year. 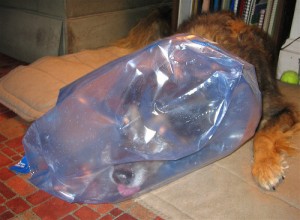 I’m not doing NaNoWriMo this year, but I’ve got a few Wrimos and Wrimo Rebels to cheer on. And for myself, I want to write 500 words of fiction each day this month, and walk three miles each day. My progress so far: 1115/15,000 words, and 6/90 miles. (I tried a little online wordcount meter, but it’s not working today… perhaps swamped by Wrimos.)

Louie went to the vet today, after several days of asking to go out every hour or two. They think he has Degenerative Myelopathy, which is most common in German Shepherds (he’s a shepherd mix) and matches his symptoms. Draggy feet, check; hoarse bark, check; hard to control the peeing and pooping, uh huh; tippy hind end, yup. It’s not strictly age-related, as dogs as young as five get it, but if he has it, it will almost certainly be the cause of his demise. He’ll be getting palliative drugs (mostly for his arthritis pain), but there’s no treatment for the progressive nerve stuff.

He’s sixteen, so we certainly knew something was coming. It will still be hard to say goodbye.

He had x-rays, and they swear they only sedated him a teeny bit, because they know he’s sensitive to anesthetic, but omg he was dopey when we brought him home! Sang went to pick him up and was sent away again so he could have another hour or two to recover…then I went to get him and he almost had to be carried to and from the car. He did the red-membrane-devil-dog-eyes routine passed out on his bed for several hours, and has only just started moving around again. He still sinks unpredictably down to the floor or just stands there like he forgot where he was going. Poor pup, he had a rough day.