Read: As promised, here’s my complete 2016 book list. I asterisked a few more favorites outside the top ten, and calculated a few numbers: nine audiobooks, 20 nonfiction (including memoir) out of 114 total, and 38% by non-white authors. This is better than last year, which was about 20%.

My current read is Cynthia Kadohata’s The Glass Mountains, a desert fantasy (so far) that isn’t well known, but it has dogs in it and I will gladly read anything by Kadohata. I thought this 1999 paperback was maybe self-published, because it has small type and small margins, but it seems not.

Write: I participated in Elementary Rolling Remix! Ten of us signed up to write fan fiction for Elementary, the Sherlock-Holmes-and-Joan-Watson TV show. At the end of September, there was one story, which was sent to two people for use as a prompt to re-mix in their own work, then each of those was sent to a new person, et cetera. Turnaround time for each story was two weeks. The result is twelve stories that form two chains, each starting from the one seed story. We are still in the anonymous period and trying to guess the authorship and sequence, but after tomorrow you’ll be able to see which fic(s) I wrote. Sanguinity participated too. I am not 100 percent sure of my guess about what she wrote. I, on the other hand, was SO good at being secretive during the whole writing and waiting time. So! Good! then blurted something while we were reading the batch of posted stories that gave it away.

Run: Did you maybe hear that Portland had a little winter weather? Snow days galore! My long run was scheduled for melt-out day: the rain started Tuesday night and on Wednesday the snow hadn’t really melted or lost volume, it was just mixed up with rain and ice chunks so the whole world was an ankle-deep disgusting Slurpee. Fortunately, that’s also the day the community center went back to regular hours, so I could slurpee-wade a half mile and then do the ten-mile run on the treadmill.

Ten miles on a treadmill is so mind-numbing, you guys. I don’t understand how treadmiles are so slow. The hundredths of a mile tick over so very slowly. What got me through it was the audiobook of Flying Lessons, the ten-story collection put out by Ellen Oh and We Need Diverse Books. It’s so good! There is not a dud among the ten, honestly. It starts with a Matt de la Pena story about the pickup basketball scene (written in second-person future, no less), and ends with another basketball story, Walter Dean Myers writing about a former pro ball player coaching his son’s wheelchair basketball team. Tim Tingle reads his own story, about a Choctaw Bigfoot, and it’s such a great story-telling delivery. Soman Chainani made me laugh out loud in the gym. The story by the sole new author, Kelly J. Baptist, is right up there with the rest. (Baptist won a contest to get her story in the book. Wow what a nerve-wracking thrill that would be, to land among the giants like that.)

Resist: Got my anti-Trump stickers printed. 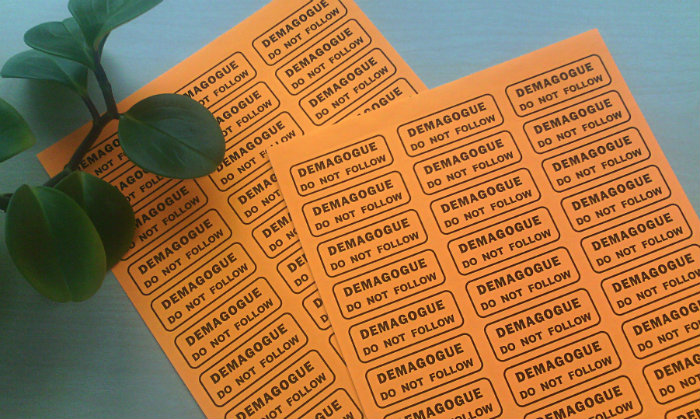 Here’s the pdf. I used labels identical to Avery 5160, but had to tweak the table dimensions a bit, at least on my printer.

Stickers are on their way to those who requested them! Actually, writing notes and sending mail is one of the more comforting things I’m doing today.

I typed the following just after reading the inauguration speech. I read it in plain text, without annotations. These were my takeaways, which leave me sobered and sad. I hope I am wrong and overdramatic, but feel compelled to record what I thought today.