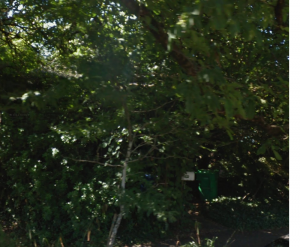 I’ve been hearing this sound like maybe a tree bough is rubbing against the house, intermittently when a breeze picks up. I went outside and tried to spot where it might be, but the shrubbery and spiderwebs got the better of me. I decided it would be better to get up on the roof and look for it from above, so that’s what I did Saturday morning.

I hauled loppers up there with me, and a sweatshirt to kneel on because the shingle was already painfully hot. There were four or five big trees encroaching on the roof in various places. One bay tree, two maples, plus some hazelnut and walnut all threaded together with clematis vine. And a cedar that’s maybe getting ideas.

I snipped and lopped and heaped the branches on the roof until I’d made enough progress that maybe the roof won’t be such an ideal freeway interchange for rodents– my other objective. Then there was the problem of where to throw it all off the roof– in most places, it would get caught in other greenery long before hitting the ground. I pretty much pitched half of it down from above the back door, and half of it down from above the front entrance to the porch. (Later when Sanguinity went to cut it up, there was way too much for the yard debris bin, so a big pile is waiting for next week.)

I liked the diagonal view across my block from the roof– all the other roofs plus antennae and outbuildings and a jumble of fences, like a Miyazaki cityscape.

Of course, the sound I’d been worrying about is still there, exactly the same as before.